Some years ago I saw the effigy of Sir William Brus in the church of Pickering, North Yorkshire. Recently I decided to try and discover who he was, only to find out that the Brus family of Pickering is not well documented. The family bore a famous name, but their origins are obscure. They were not major landholders and never rose above knightly status. The family died out in the male line in the early fifteenth century and they have received little attention from modern genealogical researchers. I have found two printed pedigrees of the family, one by Surtees[1] and the other by Foster[2]. Neither provides much detail and this article is an attempt to provide some information to researchers and give some brief details of their descendants.

The tomb of Sir William de Brus in Pickering Church

The baronial Brus family had large land holdings in North Yorkshire early in the twelfth century. Their caput was at Skelton castle, about thirty miles from Pickering, and it is from this family that the Pickering branch sprang, but exactly how is shrouded in mystery. There are two main possibilities regarding their origin:-

a)     Descent from Isabel de Brus

It is possible that the family were the descendants of Isabel daughter of Adam Brus II of Skelton, sister of Peter de Brus I. She married firstly Henry de Percy and was the mother of his heir William and his brother Henry. After Henry Percy's death in 1198, she married secondly, Sir Roger Mauduit and by him had a son Robert, who took his mother's name of Brus[3].


At an inquisition held in January 1246 concerning rents in Tadcaster granted by William de Percy, the jurors found that William de Percy gave to Roger Mauduit and Robert his son, and the issue of Robert, twenty shillings rent to be received yearly in the mills of Tadcaster, and that they were in seisin for two years before William’s death[6]. At the Assizes held at York, at Easter, 30 Henry III. (1246), Elena, widow of William de Percy, claimed against Robert de Brus the third part of ten librates of land and 20 shillings rent in Tadcaster as dower[7]. At another inquisition held in 1258-9, concerning the extent of the manor of Tadcaster, it was found that Robert de Brus received part of a yearly rent from the mills of Tadcaster[8].


From the above two inquisitions we can be certain that Roger Mauduit was alive in 1243, and that his son Robert de Brus was living in 1258. What is not so certain is that the following records concerning Robert de Brus refer to the same man, but it seems possible. The argument against this origin for the family, is that there is no evidence that the Brus family of Pickering was ever holding land or rents in Tadcaster.

b)     Descent from Brus of Annandale

The shield of Sir William de Brus on his tomb in Pickering church bears his arms, which are the same as those of the Annandale branch of the Brus family, who later became kings of Scotland: a saltire engrailed with a chief indented. The family of Brus of Skelton bore as their arms a lion rampant. This suggests a descent from the Annandale branch of the family, but there is no other evidence and some sources seem to suggest that the Skelton Brus family may have also used these arms. 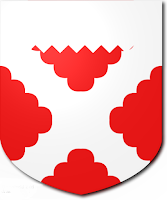 On 23 April 1265, Robert de Brus was one of the jurors at an enquiry taken at Snainton (about 8 miles east of Pickering) to determine if the Prior of Malton owed suit of court for a tenement in Newton [by Pickering], held by William son of Thomas de Pickering[10].


On 5 January 1267, Robert de Brus of Pickering had a safe conduct coming to the king’s court until midsummer, “provided that the king has not given his lands”[11]. This suggests that Robert had been involved in the baron’s war against Henry III. There is no record of any subsequent fine or sequestration of his lands. If Robert de Brus of Pickering was the same person as Robert son of Isabel de Brus, he must have been around sixty years of age in 1267 and may have died shortly afterwards.

Adam de Brus I of Pickering

Robert de Brus of Pickering was succeeded by Adam, most probably his son. In 1276, Adam de Brus was recorded in the Hundred Rolls as tenant of lands in Brompton by Sawdon and Snainton, both to the east of Pickering[12].  At the time of Kirkby’s Inquest in 1284-5, either he or his son Adam II was holding 2 bovates in Pickering Lythe of Roger Bigod and 1 carucate in Helperthorpe of John fitz Reginald[13]. The two bovates in Pickering Lythe were most probably the same properties recorded in the Hundred Rolls in 1276.


Adam de Brus died before 18 August 1284, when the bishop of Carlisle granted an indulgence for forty days to all those parishioners in the Carlisle diocese, and others whose diocesan bishops should approve, who shall say the Lord's Prayer and the Salutation of the Blessed Virgin Mary for the soul of Adam de Bruce of Pickering, whose body is interred in Pickering church, and for the souls of all the faithful departed[14].  At first sight it might seem surprising that the bishop of Carlisle should issue such an indulgence and not the archbishop of York. However, the bishop of Carlisle at this date was Ralph de Irton, formerly prior of Guisborough priory which was originally founded by the Brus family. It should also be noted that Adam’s son, Master William de Pickering was rector of Torpenhow, Cumberland in the diocese of Carlisle[15]. It is possible that Masters William and Robert de Pickering received their early education under Ralph de Irton in Guisborough priory.


Adam and his unknown wife had at least five children:

A year or so after his father’s death, Adam de Brus began purchasing property in the vicinity of Pickering.  At Michaelmas 1285 he bought land in Barton-le-Willows from Peter de Ros and Peter his son[16].  In March 1288, William son of William de Habton rented lands in Habton to Adam son of Adam le Brus of Pickering[17]. William de Habton’s son Alan was married to Adam’s niece Maud de Bergh, daughter of Adam’s sister Cecily. In 1294, Adam bought more land in Barton-le-Willows, and in 1298 he purchased property in Ellerburn[18].


Adam was employed as one of the verderers of the royal forest of Pickering, but the money that Adam used to purchase these properties almost certainly came from his two brothers, Master Robert and Master William de Pickering, who both held many lucrative ecclesiastical benefices. In 1313, the annual value of Robert de Pickering’s benefices amounted to £106 13s. 4d[19]. In the Yorkshire lay subsidy of 1301, Adam de Brus was holding lands taxed at 14s. 3d. in the liberty of Pickering and 5s. 6d. in Hutton [Buscel] and Preston[20].


In 1300, Adam de Brus was returned from the Wapentake between Ouse and Derwent, in the County of York, as holding lands, either in capite or otherwise, to the amount of £40 yearly value and upwards, and as such was summoned under the general writ to perform military service against the Scots and to muster at Carlisle on the Nativity of St. John the Baptist 28 Edward I (24 June 1300). Adam was again summoned for military service in 1301[21].


Adam married Maud, daughter and heiress of Simon Ughtred and granddaughter of Roger Ughtred of Scarborough, Yorkshire[22]. Adam died before 13 October 1305, when the sheriff of York was ordered to cause a verderer for the forest of Pickering to be elected in place of Adam de Brus, deceased[23]. His widow survived him for many years. On 23 October 1320, Maud de Brus had licence from William Melton archbishop of York to have divine service celebrated "in honesto oratorio suo infra manerium de Preston in par. de Hoton Bushel[24]." In 1332, she sold a messuage in Scarborough to her relative Robert de Scarborough[25].
Adam and Maud had two sons,

William son of Adam de Brus was born between 1295 and 1300. He became a soldier from an early age. On 4 August 1319, William de Brus going to Scotland with Thomas Wake, had a protection until Christmas[26]. His arms appear in the "Boroughbridge Roll", now considered to have been drawn up in connection with a tournament held during the Berwick campaign of late 1319. The arms of Sire William de Brus are described in the roll as, 'Gules a saltire engrailed argent and a chief indented argent'[27], the same as those appearing on his tomb in Pickering church.


In June 1327 and October 1334, he had protections, going to Scotland with Henry de Percy[28]. On 29 August 1330, William de Brus, at the request of Henry de Percy, had exemption for life from being put on assizes, juries or recognisances, and from appointment as mayor, escheator, sheriff, coroner or other minister of the king against his will[29].


Sir William Brus founded a chantry in the church of Pickering for the souls of himself and Matilda his wife, Adam and Matilda, his parents, Mr. William and Mr. Robert de Pickering, his ancestors and heirs, his uncles and aunts, and William and Alexander de Bergh[30]. On 4 July 1334, he had licence for the alienation in mortmain of five messuages, a toft, four bovates of land and 9s. of rent, in Pickering, Middleton and Kingthorpe [both near Pickering], to a chaplain to celebrate divine service daily in the parish church of Pickering for the souls of the said William and his ancestors[31].


On 30 January 1335, William Brus, and his heirs, received a grant of free warren in all their demesne lands in Barton, Yorkshire[32]. On 13 June 1339, Sir William Brus, knight, granted to Sir Alexander de Bergh, knight, [his cousin] the whole of his land in the village and territory of Haterbergh [near Scarborough], paying annually to the said William and his heirs 13s. 4d[33].


He fought at the siege of Dunbar with Henry de Percy in April 1338[34]; was defending Roxburgh castle in March 1340 and in the garrison of Edinburgh castle in January 1341. In December 1341 and August 1342, he had protections going to Scotland with Ralph de Neville[35].


On 28 May 1341, the sheriff of York was ordered to pay to John de Sigston and William Brus, knights of that shire, £17 12s. for their expenses in attending the parliament held at Westminster on Monday after the quinzaine of Easter last, to wit forty-four days at 4 shillings a day each[36].


On 16 July 1343 at an inquisition into the knight's fees in Yorkshire held by William de Ros of Helmsley it was found that William Brus, knight held two carucates and four bovates of him in Barton [le-Willows] in demesne and by service of a third part of a knight's fee[37].


Sir William de Brus married Maud, who brought him the manor of Heworth near Aycliffe in county Durham in marriage. He died before 7 May 1345, when Matilda, widow of Sir William Brus, knight presented John Ampleford to the rectory of Thornton in Pickering Lythe [Thornton Dale][38]. Maud married secondly, Sir Alexander de Neville of Raskelf, Yorkshire, younger son of Ralph de Neville of Raby and his wife Eupheme de Clavering.  On 12 November 1354 an inquisition found that Maud late the wife of William Brus, whom Alexander de Nevill married was holding two carucates and four bovates of land in Barton of William de Ros by service of a third part of a knight's fee[39].


The inquisition post mortem for Durham of William Brus was taken on 15 March 1361, at the time when his son William reached his majority. It was found that he held the manor of Heworth in Aycliffe and William, aged 21, was his son and next heir.
William and Maud had two sons: